Proud to be Catholic? A groundbreaking America survey asks women about their lives in the Church / America: The Jesuit Review

“It is the most comprehensive survey of American Catholic women ever conducted.” (America: The Jesuit Review)

Catholic women may be part of a Democratic voting wave in 2018. They are ready to welcome women deacons. Many feel their parishes are inclusive of women and welcome divorced and remarried Catholics and non-heterosexual Catholics. But they think the church could do more to welcome unmarried parents, single mothers and people who have lost their spouses. And while Catholic women who are Republicans and Democrats differ slightly on whether or not “protecting life” or “helping the poor” is most important, on most other markers of Catholic identity their differences are statistically insignificant.

These are just a handful of the findings of the America Survey, commissioned by America Media and conducted by the Center for Applied Research in the Apostolate at Georgetown University in partnership with GfK, a survey firm. It is the most comprehensive survey of American Catholic women ever conducted. The following is an excerpt from the executive summary. The full summary is available online at cara.georgetown.edu.

Francis’s words about women: What does he really think? / Commonweal 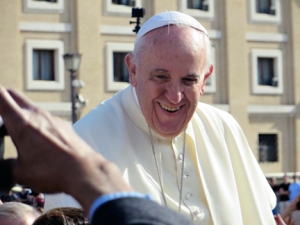 “When ordination is rightly understood, according to Pope Francis, women’s gifts for leadership can be shared within the church. Women can engage in decision-making for the church. He seems to be saying that ordination is simply less important than baptism in the grand scheme of things. And in any clerically-dominated church, that is saying a mouthful—for women and for men.”

The Catechism of the Catholic Church offers some sage advice on how to take someone else’s words. In article 2478, it says:

“To avoid rash judgment, everyone ought to be careful to interpret insofar as possible his neighbors’ thoughts, words, and deeds, in a favorable way.

“To explain this, it offers a quote from the Spiritual Exercises of St. Ignatius Loyola, founder of the Society of Jesus:

‘Every good Christian ought to be more ready to give a favorable interpretation to another’s statement than to condemn it. But if he cannot do so, let him ask how the other understands it. And if the latter understands it badly, let the former correct him with love. If that does not suffice, let the Christian try all suitable ways to bring the other to a correct interpretation so that he may be saved.’

“I thought about this advice when considering some of Pope Francis’s words about women. As many have noted, despite his stated intention of including and promoting women, the Pope has caused no little consternation by some of his remarks concerning them.”

Posted by Voice of the Faithful in Future of the Church, Women in the Church on October 27, 2016

One of the more intriguing questions Pope Francis prompted earlier this year when he announced that a Vatican commission would study whether the early church had women deacons was: How would Catholics react to women preaching?

“Some Catholic women hope to find out.

“A new website called Catholic Women Preach will publish videos showing just that, Catholic women preaching. The reflections will draw from the church’s weekly readings. The women backing the project say they hope the videos will help Catholics deepen their faith and become more comfortable with the idea of women preaching.”

By Michael O’Loughlin, America: The National Catholic Review — Click here to read the rest of this story.

Pope Francis has announced he will create a commission to study the possibility of allowing women to serve as deacons in the Catholic church, signaling an historic openness to the possibility of ending the global institution’s practice of an all-male clergy.

“The pontiff indicated he would create such a commission during a meeting at the Vatican Thursday with some 900 leaders of the world’s congregations of Catholic women religious, who asked him during a question-and-answer session why the church excludes women from serving as deacons.

“The women religious, meeting with the pope as part of the triennial assembly of the International Union of Superiors General (UISG), told Francis that women has served as deacons in the early church and asked: ‘Why not construct an official commission that might study the question?’

“The pope responded that he had spoken about the matter once some years ago with a ‘good, wise professor’ who had studied the use of female deacons in the early centuries of the church. Francis said it remained unclear to him what role such deacons had.”

Voice of the Faithful’s Women’s Initiative is dedicated to the proposition that all baptized Catholics—women and men—have equal access to all positions within the Church and have a voice in all decision-making processes. VOTF encourages conversation on all ministries and opportunities for women, but we focus our project work primarily on the restoration of the female diaconate.

Women Deacons: How Long? — paper on restoring the female diaconate to the Church (15 pages)

A diverse global network of Catholic women is set to launch an expansive and compelling collection of writings before the opening of October’s Synod of Bishops, pointedly calling on the male prelates to include their half of humanity and its experience in the synod’s discussions.

“In 40 short essays mixing the sociological, theological, and sometimes deeply personal, the writers raise a number of weighty concerns for the hotly anticipated worldwide meeting of prelates on family life — centered on the fact that extraordinarily few women are invited or involved.

“At the heart of many of their concerns, however, is their own exclusion from the Synod process. While Francis has appointed 30 women to attend the Synod as auditors making contributions to the discussions, only the 279 male members of the meetings can vote …

“‘The absence of women’s perspectives at times of reflection on these issues is not only an act of disdain toward women, who make up more than half of religious and believers, it is also an impoverishment of Catholic life, writes (historian Lucetta) Scaraffia, one of 43 women writing for the essay collection, titled ‘Catholic Women Speak: Bringing Our Gifts to the Table.’”

The collection of essays will be launched in Rome on Oct. 1.

The pastor of Star of the Sea parish in San Francisco, the Rev. Joseph Illo, recently decided to stop training girls as altar servers, reserving the role for boys. He explained that, among other things, serving at Mass is a preparation for priesthood — a male-only vocation.

“The decision to phase out girls is not only out of step with current Catholic teaching, it also risks triggering painful memories for many Catholic women, just as they were beginning to feel hopeful about their status in the church.”

Click here to read the rest of this commentary.

The Vatican’s #LifeofWomen video project: the bad, the ugly and the good / National Catholic Reporter

On the fifth day of Christmas, the Vatican seemingly gave a gift to Catholic women across the world.

“No, it wasn’t five golden rings, but rather, the chance to make a one-minute video for the Pontifical Council for Culture.

“The Pontifical Council for Culture, which is one of the ‘dicasteries’ or departments of the Roman Curia, announced that its February assembly would be dedicated to the theme of ‘Women’s Cultures.’

“The Dicastery invited all Catholic women (or at least those who were paying attention to the Vatican website in the days after Christmas) to upload a brief video response to questions that seem better suited to an adolescent youth group: ‘Who are you?’ and ‘What do you think about your being a woman?’ and ‘What do you think about your strengths, your difficulties, your body, and your spiritual life?’”

By Jamie Manson, National Catholic Reporter — Click here to read the rest of this article.